Home > Claims - Personal Injury > Should I use a 'Claims Management' Firm?

Should I use a 'Claims Management' Firm? 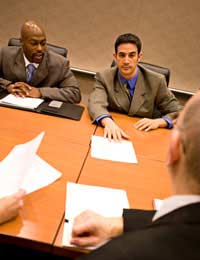 Since the legalisation of 'no win no fee' arrangements (more accurately known as Conditional Fee Agreements, and covered in more detail in an article elsewhere on this site), so-called claims management firms have become considerably more ubiquitous. These organisations arrange the entire process of claiming compensation, apparently simplifying what can otherwise be a difficult process. However, the merits of these organisations have been repeatedly called into question by commentators who suggest that they are exploiting those with legitimate claims and lessening the financial impact of any compensation that is granted.

No Win No Fee

Claims management companies either have their own in-house lawyers, or they have developed deals with third-party solicitors who pay commission on cases that are passed to them. In order to understand these organisations it is necessary to first understand the workings of no win no fee arrangements. Essentially, these work on the basis that the solicitor dealing with the case will not receive payment unless the claim is successful. This eliminates the risk of legal failures resulting in unrealistic costs to the claimant. However, solicitors operating under these terms generally add a 'success fee' to their usual charges in order to underwrite the financial risk that they take on. As a result, it is generally less financially beneficial to make a claim and win through a no win no fee solicitor than to deal with the process yourself.

In most cases, while there will be no initial financial outlay if you choose to use a claims management company, they will also add their own success fee in the event of your claim being upheld. As a result, many successful claimants have found that their compensation is severely reduced once they have paid the companies' fees. Indeed, some have even found themselves out of pocket as the fees have been greater than the compensation awarded.

It has also been suggested that claims management firms' sales tactics are dubious. There have been numerous instances in which representatives of these organisations have visited victims in hospital and pressured them into signing no win no fee arrangements when they are at their most vulnerable. Furthermore, many firms demand that claimants take out costly loans to finance insurance policies to guarantee that they will be able to meet the costs involved. All of this adds up to further reduce the impact of the compensation that might actually be won, with many claimants finding that they are continuing to pay off the loan for some time after the conclusion of the case.

On the other hand, however, claims management firms do provide a potentially valuable service. The compensation process can be confusing, and it is often useful to have a legal professional take the work out of your hands. However, you should remember that this is a service for which you may be required to pay over the odds.

In 2005, the government announced that claims management firms that do not have their own in-house lawyers will be required to sign up to a licensing scheme in order to continue to operate. This has meant that many less scrupulous firms have been put out of business, thus levelling the playing field slightly. If you choose to use a claims management firm, you should ensure that you only choose a licensed organisation. Furthermore, a little research into different companies is likely to prove valuable in the long term.