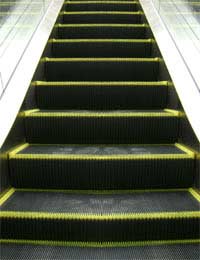 Miss Jones was on her way to work. She was about to catch a train from a station and stepped onto the escalators to go down to the platform. She was the only person on the escalators. A few seconds later, she noticed a railway station employee walking towards the bottom of the escalators. He stopped, bent down and flicked a switch, which stopped the escalator and immediately put it into reverse.

Miss Jones was flung forwards and then back, losing her balance. She fell down several steps of the escalator, suffering whiplash, cuts and bruises. Hearing the noise the railway employee pressed the emergency stop button and ran up the escalator. He asked Miss Jones whether she was all right and said “I’m sorry, I didn’t think anyone was on the escalator. It’s normally really quiet at this time in the morning so I didn’t check.”

Miss Jones was in shock and was unable to move her neck. She went to hospital and was issued with a neck brace and painkillers. For the next few days due to work commitments she was unable to take any time off but was in considerable discomfort and had difficulty sleeping at nights. She was a fitness enthusiast and couldn't take part in any activity for several weeks. The accident left her with a fear of escalators, which she began to avoid if at all possible.

Miss Jones approached a solicitor who said that he will take the case on a ‘no-win no fee’ basis. She provided him with a detailed chronology of events and he wrote to the train operator (the station employee’s employer) advising them that Miss. Jones had instructed him to seek compensation for her injuries.

The train company responded stating that they accept liability and were willing to pay out compensation. Although the company didn’t cause the accident directly, it was the fault of the employee who was acting in the course of his employment at the time. This meant that the company was ‘vicariously liable.’

Evidence to Support the Claim

The solicitor obtained the relevant information required to compile the claim. This included a consultant’s report (following an examination of Miss Jones that describes the injuries and an estimate of how long it would take before the effects of the whiplash injury subside completely) as well as proof of actual losses. Actual losses in this case were taxi fares to and from hospital, replacement shoes that were damaged during the accident and other items. The solicitor referred to the Judicial Studies Board (JSB) guidelines to determine the typical amount payable for similar injuries of the same or similar gravity. The parties settled on a figure just under £5000. The train company also paid Miss Jones’ solicitor’s costs.

What if the case had gone to trial?

Assuming that the train operator had not accepted liability. Miss Jones’ solicitor would have lodged proceedings in the county court. The case would probably have been allocated to the fast track, because of the size of the case and the expected amount of damages. Fast track cases are typically worth more or are more complex than small claims, but shorter, simpler and money in dispute is smaller than in multi track cases. Cases allocated to the fast track are expected to be resolved within 30 weeks of proceedings being initiated, are not usually expected to take longer than 1 day (5 hours) at trial and each party is limited to instructing one expert.

At trial, Miss Jones would have told the court (judge alone, no jury) about the accident and the defence would have had the opportunity to cross-examine her. The employee would also have attended court and given his version of events. Each party may have instructed their own expert as regards Miss Jones’ injuries or they may have been able to agree to use one expert between them. Miss Jones and her lawyer would need to prove that the train company was liable for the incident ‘on a balance of probabilities.’ If the judge ruled in Miss Jones’ favour, he would go on to determine the amount of damages to which she should be entitled.